Producer 1: I have an idea! Let’s forget the long history of character arcs, plots, and places, and completely relaunch our superheroes”

Prodcuer 2: What, are you crazy? The fans will kill us! That’s tantamount to rewriting the Bible in their eyes.

Producer 1: Producer 2, I feel like you’re being a little extreme. They’ll still have all of their old comics to play with. At the very least this can be a little experiment.

Producer 2: A little experiment that will get us killed! Whatever we create, they’ll compare to the originals.

Producer 2: You know, everything that existed in the DC universe before.

Producer 1: There were 52 worlds before.

Producer 1: And the continuity between those worlds was all garbled up.

Producer 2: Yeah, but they’re comics books. There are thousands, if not millions of them. How could we ever make sense of the continuity of things?

Producer 1: By starting over.

With that fictional conversation, the New 52 were reborn. Like Producer 2 feared, many people were underwhelmed with the reboot. But it’s not just because it’s a reboot of what everyone knows. It’s because a lot of the reboots were over-sexed (Starfire), over-bloodied (Wonder Woman), and in general over-edged versions of their former selves. Yet, it wasn’t all bad. Batman and Justice League were done particularly well, the new characters were amazing (Prez, Midnighter), and though some female characters lost some of their feminist spirit, others emerged stronger than they were before.

Below’s a look at 3 female characters that the ups and downs of their New 52 reincarnations.

One of the things that’s most striking about the New 52 reboot to me, is that a lot of the female characters are decidedly more masculine. In some cases this empowering, but in other ways its sort of over testosterone-packed.

Wonder Woman didn’t start off particularly strong. But she soon found her stride and found it well. Unlike previous iterations where Diana was a here defined by her compassion and her dedication to humanity, in the New 52 she’s the demi-god child of Zeus. The Amazons aren’t’ cautious and caring, their down-right deadly. Instead of being trained by her mother, Diana is now the pupil of Zeus and Ares. In the grand scheme of the Greek Pantheon, this makes sense, but it’s ultimately placing more badassery in the hands of the men. Agency is taken away from the Amazons and, more importantly, Diana.

Still Diana is BA in her own right and we get to see a new more masculine side of her. The biggest improvement is that for the first time ever, Wonder Woman is being written by a woman. It’s a small step in the right direction, but an important step nonetheless. I’ve had a lot of fun seeing Diana’s arc in the New 52 and I hope we get to see Diana take on more prominence in further issues.

In the original comics you might have known of Black Canary as Green Arrow’s wife (if you knew her at all). Good-bye being identified by significant other status! Black Canary’s got her own awesome storyline now and it’s much more than just being Green Arrows SO. Yes, she eventually ends up in a thang with her cover ops agent partner Kurt Lance, but it’s clear that he’s the tag-along in this story. I’m a big fan of the Birds of Prey series. We get to see Black Canary kicking butt alongside a rotating cast that includes Katana, Poison Iv, Starling (and even Batgirl) for an awesome story of team work and lady-power. Black Canary’s transition to the New 52 isn’t without its flubs. The first launch of her character in 2011 was a little rocky, but since then, we’ve seen some pretty cool and complex stories with her.

Now women characters should exist outside of their SOs, but relationships are part of life, and so some time should be spent on exploring that perspective. Enter Aquaman and Aquawoman (Queen Mera). In this iteration, Aquaman’s a sad sack who gets more or less exiled from Atlantis. His wife, Mera, follows him. But she’s not just an accessory, she’s her own character. 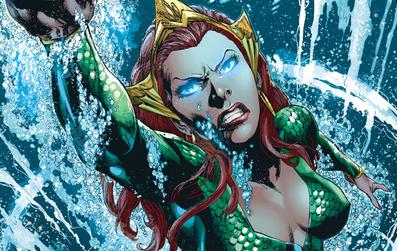 We get to see how she struggles adjusting to a world outside of the one that she’s familiar with and we see that she has some really, really big anger issues to overcome. In the Throne of Atlantis story-line, she gets to save Nereus the moody king of Xebel. When it comes to fighting with the story-lines big baddy, the Dead King, Mera goes straight into the fighting, whereas Aquaman conveniently gets knocked unconscious and rescued by Vulko. In the end of the story-line, Aquaman does end up saving Mera, but hey, that’s what a relationship is, right? Give and take.

What’s a woman character that you think were handled well in the New 52? Do you have some particular gripes? Do you totally disagree with everything I’ve said? Please let me know!